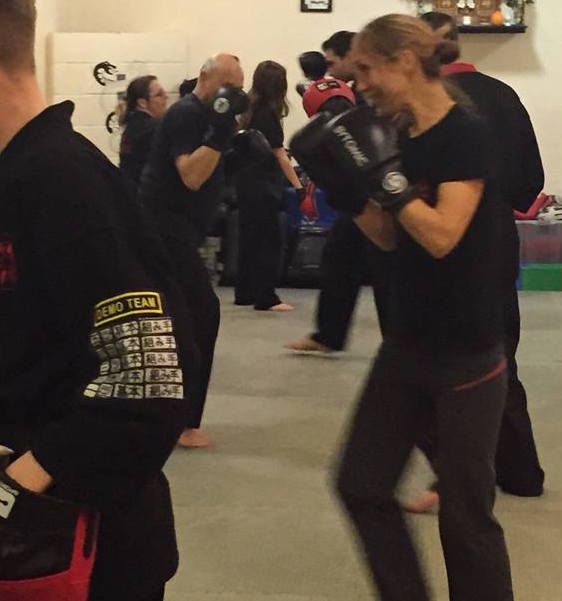 My favourite.  We form two lines down the centre of the Dojo facing each other and then spar with the person that you are facing.  After a couple of minutes we stop and the person at the end of one line goes up to the other end and everyone in that line moves down one person.  This way you get to spar with every person in the other line.

It was inevitable that John and Vince two of our 2nd Dans would end up facing each other.

They just didn’t like each other, nothing was ever said, but we all just knew it.  It was the roll of the eyes, the facial expression when the other was talking and just the aura between the two. It was a bit like two same poles of two magnets facing each other.

And that was the funny thing, we all knew that they didn’t like each other because they were so similar!  They both had this underlying arrogance, neither of them knew that they had it themselves and both of them hated it in the other.  Itís a bit like someone coming across a mirror for the first time, not knowing that the reflection was of himself and smashing it because he didnít like what he saw!

Anyway, these two similar poles repelled each other and the sparring turned nastier and nastier until it became a real fight.

“Yamee! ” Sensei held them both by the scruff of their necks, they were still trying to chest butt each other and both gave out their incredibly similar obnoxious aura.

Sensei all but ignored the situation and sat everyone down…

“What do you understand by the reference in the classics to ‘invest in loss’?”

“Learn by your mistakes” said one.

“That’s part of it” replied Sensei.

“OK, let’s start with physical technique.  Your Martial Art should first be that of yielding. If your attacker wants to be arrogant, take the humble approach (John and Vinceís faces went red).  If he attacks ferociously, respond with skilful softness, by blending with his attack and redirecting it to a point of weakness.

In lifestyle, to not build up unnecessary attachment to property or pride in such a way that it can be taken away from you and therefore weaken you..  Lao Tsu states in the Tao Te Ching:

Not exalting the gifted prevents quarrelling.

Not seeing desirable things prevents confusion of the heart.

(John and Vinceís faces appeared to be getting even redder).

The more you accumulate, from physical tension, stress and anxiety to pride, ego, arrogance and even physical property, the more you have to protect.  You become a walking advertisement for violence and aggression.  The more senior you become in the Martial Arts, the more you should ‘invest in loss’and the more humble you should become. And I don’t mean the ‘false humility’ shown by some, I mean with proper speech, conduct and livelihood as explained by the Buddha.”

“But sometimes in a fight you have to stand your ground don’t you?”  John was trying to save some face.

“Martial Artists don’t fight.  We simply reinstate peace.  Don’t mistake this for weakness, the skills of dealing with violence contain considerable self-control.  ‘Invest in loss’ doesn’t mean become weak, in fact it is a very positive statement isn’t it?  INVEST in loss says that there is much to be gained from it.  ‘Fight’ intimates a struggle between two people, we donít have to struggle, when he pushes, we pull, when he pulls, we push, this is not negative is it?”

“The mind of a Martial Artist is always sharp, attentive, peaceful and calm.  This takes an incredible amount of training, particularly in the face of imminent danger and an opponent who is violent and aggressive.  Normally the response is to run away out of cowardice and fear or lose control, like you both did out of pride, arrogance, fear and aggression.  (Now their faces really were the brightest shade of red possible and it was obvious that they were both wishing that the earth would open up and swallow them).

Peace and harmony are earned, usually through years of blood sweat and tears.  To not invest in loss is to become a coward and controlled by fear and/or become violent and aggressive.  Fear and aggression are two sides of the same coin, as Martial Artists we ‘invest in loss’ and throw the coin away, our natural state is peace because we have no unnatural attachments.

People refer to the classics and terms like ‘invest in loss’ very glibly.  Think about these terms very carefully because you are judged by your ability to not understand them but by whether you live to them, they should influence your every thought and action.

Your action today gentlemen was shameful, but I hope that you will now take this experience and ìinvest in the lossî by learning from the experience.”

One thought on “Invest In Loss..”