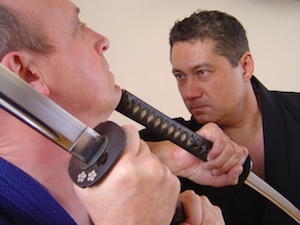 The  pennants fluttered in the breeze……… the red  sun  rose from  behind the snow capped mountains throwing fearsome  shadows among  the  warriors…..

Icy fear gripped  my  intestines,  the heaviness   of  death  chilled  everything,  the  horses   reared nervously,  snorting  out plumes of condensation  into  the  cold air…..

Today tempered blades would be severing many a spirit from incarnation and sending them back into the void…..The  generals sat motionless astride their mounts like  icons  of power,  their  eyes  narrowing  behind  ferocious   war   masks, maintaining a continuous growl of ‘Ki’ from their Tandens filling the  space  between  us and the enemy with  our  power,  claiming ground in spirit first…..

The  Gods of the Earth prepared the ground for  the  bloodletting and fallen corpses to rot into eventual rebirth……The  Gods  of  the Air prepared to  guide  the  wandering  souls, severed in battle to the Sun Goddess Ameterasu…..The  Gods  of  Fire  stood ready to fan  the  flames  of  battle, enacting change at Man’s desire….The Gods of Water were already wailing at the human condition and building  the wave of emotion for the aftermath, sending  ripples out to every relative of every person there….

The ‘growl’ of Ki was picked up by the ranks and built up into  a blood curdling scream, what had taken place on the spiritual  was now  about to take place on the physical…..  I  invigorated  my hairline,  sent  power through my spine and  projected  from  the Tanden  with a Kiai that joined life and death….

Thousands  of tempered bloodletters slipped effortlessly from their sheaths and took  on  a bloodlust of their own…..  The gap  finally  closed with a run to add momentum to the cutting power……

Time  stood still as once again human spirit joined  together  in mutual  sacrifice to create a space between the world of man  and the realms of the Gods where both survivors and victims learn how the joining of spirit and body is both tenacious and tenuous….

In  the  midst  of battle we stumbled over the  dead  and  dying, slipping  on  spilled intestines and  tripping  over  dismembered limbs,  my legs felt like lead, my arms were too heavy, my  chest and  shoulders  were heaving and I just couldn’t get  enough  air in………

Suddenly  I  was  facing  a dismounted  General  from  the  other side….    He  still looked immaculate and  calm…..  his  feet gripped  the  floor as he inched forward, with  hips  lowered  he raised  his  blood soaked katana smoothly to  ‘Jodan  Kamae’  and hissed  through his teeth behind the ferocious war mask……   I moved  forward with a feint to draw his cut and my intention  was to sidestep it and cut his neck, he didn’t react to the feint and as  I  rotated I could not help but open my neck to  his  waiting blade………

I  felt  no  pain….. only a burning sensation  followed  by  an intense  weariness……  as it got heavier and  heavier  I  felt myself  loosen  from  the  cloying  stickiness  of   incarnation, suddenly I was free and carried no weight…….

”Warrior…….”   The  tones  were  soft  and  silky  and   very familiar, they carried a clarity beyond incarnate hearing…

My guide laughed……”No  Warrior, because you are still incarnate elsewhere  learning from this experience…….”

”Death is a creation of life……. so when you cease to be alive death also ceases to exist because you transcend duality…….”

”So how real was the life and death that I just experienced?”

”As real as the one that you are just going to.”

”Then which one is the illusion?”