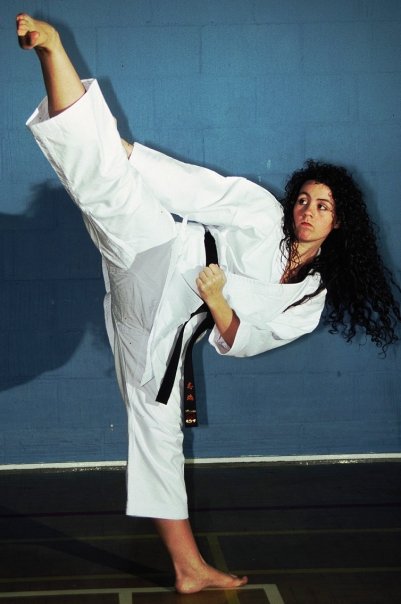 The Martial Arts are primarily feminine.

Many would think this a strange statement until they start to look a bit deeper.

By nature men are linked to the sun (yang) and women to the moon (yin).  Women have a 28 day biorhythmic cycle and their emotions change to reflect where they are on it, their range of emotions tends to be on a far wider spectrum than men.  Some say that this would make them unsuitable for martial arts, but if they can use this range of emotions in a positive way they have the ability to become better martial artists than men.

Men are on a 24hour biorhythmic cycle. It’s often said that men are like dogs and women like cats.  Dogs are generally the same each day, as long as their basic needs are looked after on a daily basis, they are usually happy.  Cats can be moody, one day they respond to you with love and affection, others they are aloof and on some days will hiss at you and are liable to scratch you.

The Martial Arts require empathy, they also require the ability to yield, blend, stick, follow and subtly redirect the opponent, these are all feminine qualities.  They call for a low centre of balance, which is more common in women, they require grace, fluidity and a natural ‘ease’ of movement and as women tend not rely on strength, technique comes more easily to them

Men enjoy martial arts ‘sparring’ it’s much like the sexual preening that goes on throughout the animal kingdom, where the males of the species lock horns to show females that they are the ones that they should mate with, these shows rarely result in death or permanent damage and the human male enjoys flamboyant shows and techniques that go with Dojo sparring and competition.

The female of most species is deadly.  Their role is to protect the family and the young.  Threaten any woman’s’ child and watch them turn into a venomous avenger!  There is no time to ‘play’ – the female job is to kill and do it fast.  Women are also great strategists with the ability to use guile, the weapon of choice is more likely to be poison or a pair of scissors in the back whilst you were asleep or have your back turned than it is to have a toe to toe stand up fight.  Traditional martial arts techniques are more designed to suit the female purpose than the male, it’s only as the sporting aspect has come to the fore that the male way of ‘sparring’ has become more popular.

Women are also more intuitive.  This comes from the 28 day cycle and their wider emotional range, it makes women function more heavily from the right brain than the left.  The ability to read the subliminal body language of a prospective opponent and to read a situation more spatially is a feminine skill.

Women have a greater capacity to accept and deal with pain using emotional strategies than men and once committed, are more likely to maintain their training schedule.

There are many records of female warriors throughout history, the Rig-Veda, an ancient sacred poem of India, written between 3500 and 1800 BC recounts the story of a warrior, Queen Vishpla, who lost her leg in battle, was fitted with an iron prosthesis, and returned to battle. On the walls of Hittite fortresses dating to 1300 BC there were paintings of woman warriors carrying axes and swords.

There are also legends of the Greek Amazon women warriors who may have been based on Scythian women of the 4th and 5th Centuries BC in what is now called Iran.

In 39AD two Vietnamese women named Trung Trac and Trung Nhi led a Vietnamese uprising against the Chinese. They gained control of 65 citadels and reigned as queens until 43 AD.

Even Japan was ruled in 200AD, by a warrior priestess queen called Himoko.

One of the most famous British female warriors was Bouddicca, who was the widow of King Prasutagus of the Iceni tribe. She was regent for her two daughters who inherited half of the kingdom, while the other half was given to Rome. The Romans objected to being given only half of the kingdom and provoked a revolt in 61AD.  It was said that in the ranks of her soldiers there were more women than men fighting.

Women have always been fighting alongside men at war or keeping the home and economy safe whilst the men were away and often doing it with deadly efficacy.

More and more women are attending martial arts classes nowadays because they want more than just exercise.  Health and fitness play a large part of the training, but self-defence, prevention of abuse and the mental and emotional aspects also play a large part.

In my Dojo 50% of both the adult and children participants are female.  This is also reflected in the senior grade classes and the females easily show as much determination and resolve as the male participants.

There are still misogynist instructors around, but they are rapidly becoming a feature of the past as women prove themselves in class and become instructors and chief instructors in their own groups.

The way was paved in karate by people like Pauline Bindra, the first karate black belt in England and now 8thDan and Chief Instructor of her own Shotokan association.  Pauline has been followed by hundreds of female karateka rapidly climbing the black belt ladder.   England has had many top world class sport karateka like Tricia Duggin who has proved herself on the world scene time and time again to be a very powerful person and able to knock out most of the male karateka around!

Any good technical martial art will suit women, they can still train in those that rely on strength and size, but will have to compete in their own category and the art will not be so suitable for self-defence.  Joining an all female club or class defeats the object if you want self defence and mixed classes certainly seem to spur everyone on to train harder.

The standards for men and women should be equal with women making up with skill what they may lack in size or strength.

When looking to join a new club a woman should look for other females in the club, what their grades are, what their standard is and how many are there, as I said earlier it’s not uncommon nowadays for there to be 50% split between male and females in hard working classes and in the higher grades.  It’s good to have people of the same gender in the club to aspire to.

She should look to ensure that the coaches are properly qualified and that they have an equal opportunities policy in practice and not just stuck on the wall.

Joining a good martial arts club gives the opportunity to take advantage of the feminine qualities that a woman has.  Most clubs have a good training policy for women and treat them equal to men.  The training will hone the mind, emotions and body in a progressive way for the rest of her life, something that most gyms lack with mindless repetitions of whatever the latest exercise fad is.

It’s also a great holistic lifestyle, giving new friends, new opportunities for travel and many related ways of training, exercise and the fun of investigating the orient and related cultures.

One thought on “Women In The Martial Arts”