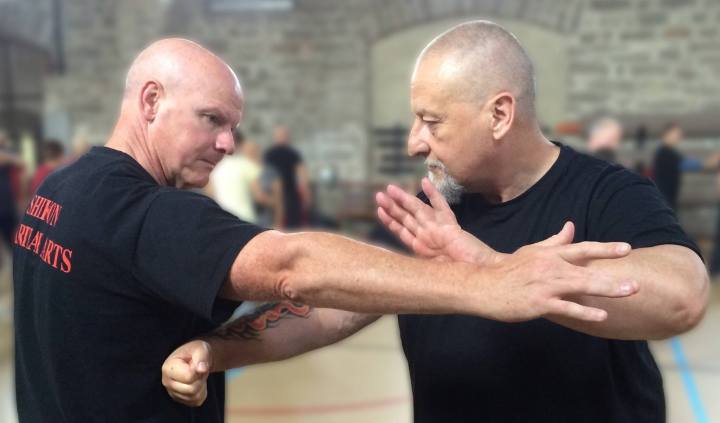 “Okay, guard up and block my attack please….”  I put both arms up, hands protecting my face and elbows protecting my ribs and took a fighting stance.

Sifu turned to face the other students who were still trying to stifle a laugh at the way I’d been ‘volunteered’ by my ‘friend’.  “When you go into ‘fight mode’ you also naturally go into ‘coarse mind’ where your mind will only pick up movement that is perceived as a ‘threat’, so when I throw a punch….” As Sifu threw the punch I blocked it easily and felt quite proud of the fact, “it’s easily blocked by the alert coarse mind” Sifu continued…

“But in Tai Chi we refine the mind and movements and….”  SLAP! I felt my face stinging….

My face was red as much from embarrassment as the slap.  “How did you do that?” I couldn’t help asking

All the students were thoroughly enjoying this, “it’s simple answered Sifu, whilst I was talking I sneaked my arm through your guard and tricked you, I used subterfuge, I worked subliminally on you.   I moved normally and naturally in a way that you wouldn’t perceive as a threat and therefore your ‘coarse mind’ ignored it.”

“Of course it is”, laughed Sifu – “that’s how we win.  As Tai Chi is natural movement coming from a refined and trained mind we don’t add any stiffness or show intent in a way that the opponent will perceive as a threat.  We also have the trained, internally connected body that means that when we touch the opponent lightly we can still deliver great power from our feet and legs, through the core and waist and then out through the hands.”

“I can’t see how we can touch lightly and still deliver power” one the students  called Tom asked.

Sifu turned to me “how does your face feel?”

Tom stepped up to Sifu and took a fighting type stance, Sifu brought his hand up very lightly and placed fingers on Tom’s chest, slowly folding them into a fist and that was followed by a barely discernable wave from Sifu’s feet, through his waist and into his hand that sent Tom flying.

Sifu continued “speed and power can easily be an optical illusion, a mini car pulling away from the traffic lights might give a roar with the engine, wheel spin away and make lots of noise giving the impression of speed, but a Porsche will pass it, the engine barely giving a whisper and not even look like it’s going fast.

Similarly many people appear to be moving fast but are in fact filled with tension, they are moving like a car with the handbrake jammed on, they can breathe noisily, stamp their feet, pull faces and it matters not a jot…..

Power comes from efficiency, the more naturally you can move, the more you can smoothly accelerate, the more bodyweight that can get behind the strike and the better focus you can manage – the more powerful you will be

If you can direct your force into the opponent in a way that destabilises them, if you break their root, their posture and disrupt their mind and breath, the more effective your strike will be.

If you can deceive their mind with your mind and movement, they won’t even see the strike coming, their body won’t be expecting it and you will have a far greater chance of success.”

“So that’s why we move slowly and smoothly in Tai Chi?” Tom asked.

“Is that what is meant by ‘4 ounces to move 4 thousand pounds’ in the classics Sifu?” I asked..

“That is referring to receiving energy, but works in the same way” answered Sifu.  “We deceive the opponent by receiving their movement with lightest touch and then stick, follow, redirect and unbalance them.  Their mind is looking for a more violent, harsh movement and they don’t feel the soft touch, the subtle blending and redirection.  They find themselves on the floor and don’t realise how they got there!

That’s why Tai chi was originally called ‘Soft Cotton Boxing’, because for the opponent it’s like putting your hands into soft cotton and finding an iron bar or needle in there.”

“So for either attack or defend the principle is the same?” I asked.

“Exactly,” replied Sifu.  “You move softly, deceptively and to the opponent, subliminally, you utilise continuous, connected movement with skill and power.  You use a quiet, alert and focused ‘hunters’ mind – that’s Tai Chi Chuan and ‘Soft Cotton Boxing!”

I realised that all this time I thought that I was just learning ‘form’ for what I construed as ‘health’ training I was in fact learning a very efficient and advanced fighting system, and that ‘slow’ wasn’t really ‘slow……