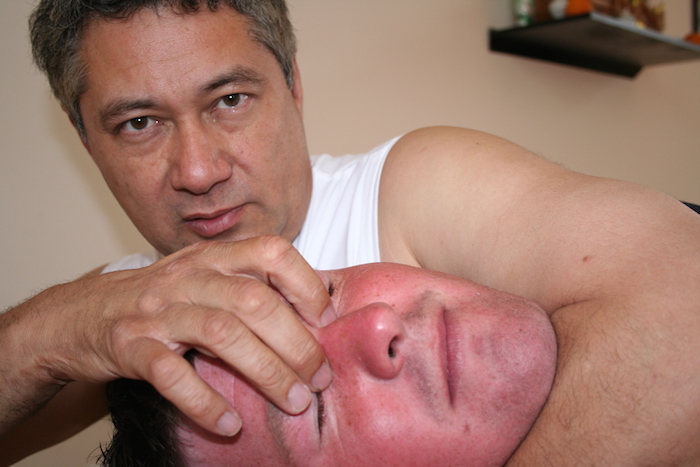 Spittle accompanied the words as he spat them out towards me.  He was right in my face…. his eyes were wide, his chest raised and arms outstretched  to make himself look bigger…  There was no way he was going to let me pass..

They were classic ‘chavs’ baseball caps, vests, tattoos, bling jewelry and mandatory cans of ‘Special Brew with Staffordshire Bull Terrier in tow, they had obviously been drinking all day along with taking other narcotic substances and had become loud and insulting.

I had received the odd ‘glare’ but thought nothing of it but when I made the excursion to the Gents, they obviously saw me as ‘separated from the herd’….

“Who the **** do you think you are coming into our ‘hood’ without paying dues?”  His ‘core’ was wide open and stretched with his ribcage lifted separating upper and lower body, his solar plexus was screaming ‘hit me’ in unspoken body language and he couldn’t get any closer without inserting something into me.

From my right I heard “Yeah, give us your wallet and phone” and could smell the Special Brew and and the years of substance abuse on his fetid breath..

I started to ask a question “Do I know you?” – And as I saw the flicker of his brain trying to engage in his eyes – I hit him square in the solar plexus, engaging my entire body into a flinch and uppercut movement, I felt my fist go right inside and up into his ribcage triggering a core reaction that immediately took him into a standing foetal body position.  His eyes grew wider with shock and his mouth gaped even more as he vainly tried to suck air into his paralysed lungs. As his head dropped and he started to crumble to the ground I shinned him in the face feeling his nose ‘pop’ as he rocked back against the wall and slid to the floor.  That ugly face was now just a baseball cap and blood.

I knew the next move would come from fetid breath on my right and as he tried to ‘snipe’ me from the side I lifted my shoulder and bumped his punch away using the motion to power a side elbow into his ribs and as his head lurched forward from that chopped him in the throat.  He gave a gurgle and fell to the floor clutching his throat and desperately trying to breathe.

This left two mouthbreathers, one to my left who I think was desperately trying to work out how to leave and one behind from whom I heard the ominous ‘click of what I knew to be a flick knife.

I turned as he stabbed and used my arm like a chicken wing to knock his knife arm away, I grabbed the arm and pulled him on to a head butt, I drove my knee into the inside of his leg to collapse his structure and turn him to the corner, this allowed me to drive my elbow over the top and down into his already damaged face, I then twisted his wrist feeling that satisfying ‘crack’ to make him drop the knife.

I turned to the last one, “I’m gone” he said shakily and stepped on his mate and assailant number one in his rush to leave, I couldn’t let him go in case he alerted any other friends out in the bar and I’d have to fight my way out, as he stumbled on his mate I grabbed him by the scruff of his neck with my left hand, spun him around and delivered a right hook to his jaw, as he was already off balance he flew into the wall and if the punch hadn’t knocked him out the wall did.

Four bodies, all breathing some moaning, choking and moving, with the friendliest Staffordshire Bull Terrier trying to lick Mr ‘Flick Knife’ – time to leave.  I composed myself, tried to hide the blood on my clothes and went out into the bar.

“Time to go guys, I just laid out those chavs who were glaring at us earlier” – we all left quickly.

When I got home I cleaned up, sat down and went through the events in my mind.  They had obviously followed me after I had left the bar to go to the Gents and there was no other way out – the fight was inevitable and I’d subconsciously dehumanised them and worked out the order of attack just fine .  The leader had made the big mistake of opening his core and assuming that it would intimidate me.  I had switched to ‘Hunters Mindset’ as soon as I realised what was happening and this kept me highly aware, calm and calculating.  My punch had come from a relaxed position and the idiot hadn’t even seen it coming – it did its job magnificently, the follow up shin strike worked well but I could feel a lump and bruising already starting to come up at around mid shin, but I think it was worth it!

On reflection maybe I should have turned number one around and used him as a shield so that I could see all the others, but I may not have been able to deal with them all so quickly if I had….

The shoulder block had worked well on number 2 attacker and it let the elbow strike go in unnoticed, the natural follow up with the chop to the throat was an automatic reaction and could have proved lethal, luckily he was still alive but choking afterwards and I thought he’d survive, but I would need to be careful with that kind of reaction in future.

I had assumed that all of them were armed, and the click of the flick knife gave attacker number 3 away, the turning chicken wing and follow up worked but I think there was an element of luck involved as the knife must have been an afterthought for him after I had taken the other two out, if he had intended to use it from the start, I could be dead now….

I felt a bit bad about number 4 as he was trying to get away, but I couldn’t take the chance of him alerting others and increasing the danger to me – and anyway, he shouldn’t have been there in the first place.

They had all been on drugs and alcohol and that made them highly dangerous and unable to think straight.  I had escaped as quickly as possible afterwards making sure that my friends were safe.  I certainly won’t be going back there!

I felt there was no point in contacting the Police as instant justice had been served and there would be no point in complicating matters more and letting my identity be known for retribution.

I detest violence and I detest bullies even more, I feel that peace is earned through inner strength and that bullies need to be stopped before they harm others, this is where martial arts training plays an essential part in society.  Unfortunately some people just cannot be reasoned with.  Our martial training gives us the mind, body and technique to deal with these kind of people and prevent them from going on to attack other people.

The story above is fictional but uses practical experience from a number of sources to demonstrate how a trained martial artist may react in similar circumstances.