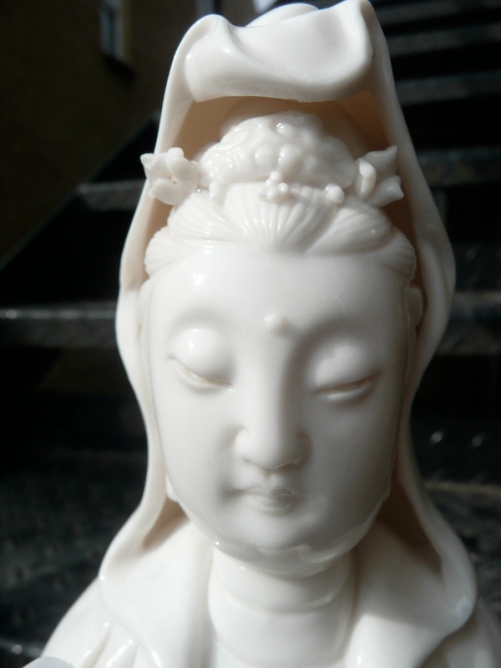 There was always a pile of old martial arts magazines in the corner of the Dojo for parents and students awaiting their classes to read.  It was reminiscent of the old fashioned barber shop with the tattered and slightly rude magazines lying around to read whilst you waited for your turn to get your hair cut – or the ancient pile of ‘Tatler’ and ‘Home and Garden’ in the dentist waiting room.

Greg and Tanya were flicking through looking at the various adverts and articles with obvious distaste.

“The Worlds greatest what?  How does he know?”

“How about this one, the World’s leading authority…

“Probably according to his mum…”

“I guess it makes the Martial Arts just another market place…”

“Reminds me of Jesus in the Temple”

“What do you mean?

“Thinking of Martial Arts as a spiritual pursuit, – I’ll tell you the story…  It was the feast of Passover. Jesus went to Jerusalem, when he entered the Temple, he found chaos. Merchants were selling sheep, bullocks and doves; money changers were sitting at their tables and trading. The noise of the cattle, the sheep, people talking, the quarrels about prices, the jingle of the coins — all this gave the Temple the semblance of a bazaar rather than the house of God.

Jesus made a whip of small ropes and drove all the traders with their cattle out of the Temple. He overthrew the tables of the money changers and poured out their money. He told them to, “take these things away; make not my father’s house a house of merchandise.” No one dared to disobey him.”

“Looks like we could do with a ‘saviour’ in the Martial Arts.”

It was at this point that the class finished and Sensei came over. “What’s happening guys?”

“We were just looking at the adverts and headlines, we never hear you bragging about being ‘the best’ or ‘the world’s greatest’, or ‘the hardest’…”

“I guess I’m just an old fashioned guy at heart.”

“But we think that you’re far better and more experienced than many of these guys.”

“I guess they need the custom, most of my students have been with me for over 20 years and they know what and who I am, I don’t need any more ‘business’ so I don’t have to compete with them.”

“No I haven’t, but that’s because I was brought up to never brag about my ability as a child and my sensei’s taught that a good martial artist was always polite and humble and if need be, his skill would talk for him.  It was not up to the individual to judge his own skill, but for others to do so.  None of my sensei or sifu would have spoken in this way and they would have been horrified and disowned me if I ever did.”

“So why do you think these people are like that?”

“Do you think that they are martial artists?”

“They are the merchants in the temple.  What they teach is ‘instant trickery’ if you attend one of their courses you learn something that you can do right away and teach in your own club that night.  What I teach is skill building, it’s not easy to learn or do and you need to spend years to fully grasp it, the ‘way’ of martial arts is not easy and requires time and effort, it’s certainly not for that many people.

If you read two adverts, one says ‘easy to learn’ and ‘be a black belt over the internet in one year’ and the other reads ‘hard to learn and black belt is 5 years’ which do you think would get the most customers?”

“That’s right.  My students tend to seek me out because they have made a serious long term commitment to themselves and therefore subsequently to me.  The others market to people to gratify their ego and  train at a low level in a social environment; they sell to the majority, I teach the minority, and am happy to do so.”

“Don’t these people irritate you?

“Not really.  Any discerning person would pass them by.  I would never have gone to them as a student myself, but searched out the ‘real thing’.  Those are the people I cater for.  I guess it’s a case of ‘caveat emptor’ (buyer beware).”

“They should research before they invest.  You can also quickly tell who is bragging and who is showing off, it’s hardly rocket science.”

“I guess those that don’t think it out, research or invest time and effort will get what they deserve…”

“Or what they want.”

“I can’t see why these people don’t irritate you.”

Our martial arts contain a deep personal alchemy that takes a lot of long study and development.  Our goal is not violence, it’s not to hit the hardest, it’s not to destroy – in fact it’s the opposite, to develop and keep the peace and to help build the community around us.  We don’t work on fear and excitement but on inner calm, power and depth.

Our roots are deep and permanent and passed carefully and with responsibility from one generation to another.”

“So you wouldn’t want to overturn the merchants’ tables?”