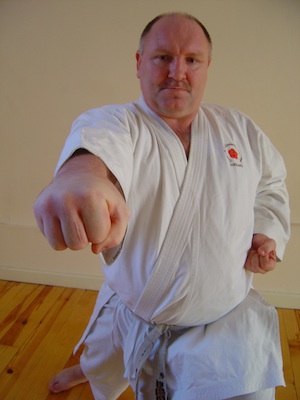 “Junzuki Hidari Gamae…….  Ich!”  The atmosphere changed to that of total awareness as the class took up left step and punch in forward stance posture with an audible snap of their Karategi.

“Yameee!  What was that?”  Delivered in Sensei’s immaculate take off of Bruce Lee in Enter The Dragon…..

“A finger pointing to the moon Sensei!”  Exclaimed one wag sensing that there was a bit of humour in the air.

“More like a retentive hop with a finger in Uranus and mind in neutral…” mused Sensei.

“Let’s look at the punch first.  You need to maintain the upper body position whilst the kick takes place allowing the lower body to twist against the upper, building up power in the waist that is released when the kicking foot touches the ground to power the first part of the punch.”

“Is that the equivalent of twisting the waist backward before punching, like an untrained person would Sensei?”

“The power source is the same, like chopping down a tree with an axe, or using a baseball bat, but you are concealing the movement with the kick and also not telegraphing the kick with the upper body.  Although to the spectator your upper body doesn’t move, to you it is pulled backward against the lower half that is moving forward.”

“Sensei, you stated that this powers only the first part of the punch, what powers the second?”

“Well, at least it means that it’s only a small pain!  As a practitioner, you only have to remember a list of actions to perform in the right order, as a coach you have to know why……”

“The list is to ensure that the power sources flow in the right order and come together at the right time?”

“Exactly!  Here you have a basic exercise combining a punch and kick that add power to each other, a very clever combination…..”

“So with the punch, we have to remember to maintain the upper body position whilst we kick, then use the knee raised position and slight lean back to power the punch, releasing the waist and then vibrating the hips…..  is that right?”

“Correct, timing the release of the waist with the ball of the front foot landing on the floor and the completion of the punch with the heel.”

“So what about the kick Sensei?

“OK, “kick” is probably a bad word to use, “punch with the foot” would probably be far more accurate, “kick” is what an Englishman does to a football or a tin can in the street.  It involves a swinging motion of the leg from the hip, whereas we draw the foot up to the body and then extend it out in a “punching” type motion…..”

“So what do we have to remember when we “punch with the foot” Sensei?”

To turn the supporting foot by just lifting it off the floor, lean slightly back and raise the knee to its highest point whilst bending the supporting leg in one fluid movement.  Then fire the “footpunch” by creating a whipping movement from the supporting foot through the Seiki Tanden to the foot.  The Knee needs to remain in the same raised position throughout the movement and you must take care to not overextend the knee joint.  The ankle needs to be relaxed to allow the whipping motion to take place and the sole of the foot needs to remain parallel to the floor to ensure a straight “footpunch”.  Pull the toes back so that the ball of the foot just behind the toes makes the impact.”

“This is too much to remember Sensei………”

“No it’s not, it’ simply a list, but you do need to develop and attentive and concentrated mind to be able to remember and apply it’s contents.”

“Yeah, but the movement is too fast to be able to do all that…….

“What you mean is that you are doing it too fast to be able to apply them, and that is my point.  You have to slow the movement down, pay attention and concentrate.  The trick is to practice at a speed that you can do it correctly, remember speed and power in a technique is due more to skill than haste.  Often you have to have the patience to release the technique at the right time instead of just rushing it.”

“But for both the kick….. er sorry…. “footpunch” and “handpunch” it is an awful lot to be able to remember and apply…..”