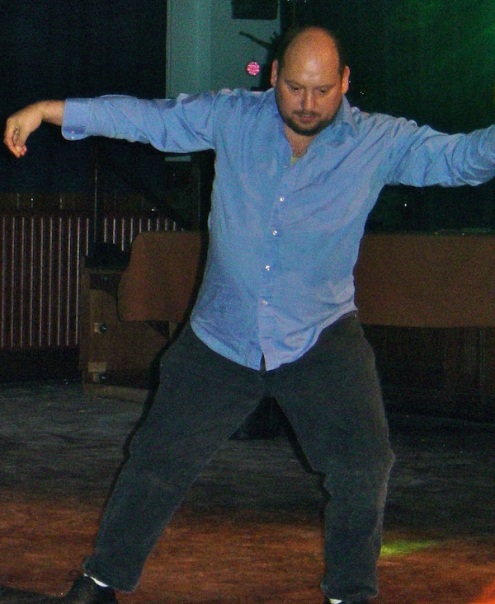 In Memory Of Alan Emery

“Why do you let that man train?”

“What man” I asked politely.

“Alan.”  Alan was one of our ‘special needs’ students.  “Whenever we’re doing our form he never moves in time with us, he’s always bumping into us, when we’re doing our exercises he’s always making strange noises and passing wind – it’s disgusting!”

“I don’t just let him train; I actually sponsor him to train here.”

“Why on earth do you do that?”

“To help people like you become more tolerant.”  There was no answer to that.  The student coloured up and left quite quickly.

Alan was indeed a colourful character.  When he first came to the Dojo around many years ago he was living in hospital and could only go out if accompanied by his carer.  He was schizophrenic and had a plethora of health problems including diabetes.  All were controlled by a very careful balance of drugs and diet.

He loved the Martial Arts.  He had the mental age of someone around 8 years old.  He took up both karate and tai chi and attended classes at every available opportunity.  His carers had to spend endless hours reading papers and magazines ‘on the benches’ whilst he indulged in his favourite hobby.  He loved being in the Dojo environment, he was rarely seen without a smile and although he never remembered anyone’s name he always greeted them with a handshake and a name that he probably thought suited them.

Alan was clumsy, he had no natural ability or co-ordination whatsoever, the drugs and diet he was on also gave him chronic flatulence problems, sometimes he would leave the room to pass wind and sometimes he would be ‘caught by surprise’ and after filling a silent dojo with his wind harmonies would follow it with a meek “sorry”…

As time went by he was allowed out by himself to attend classes.  He then moved out of the hospital and into a residential home with ‘live in’ carers.  He was happy to be out of the hospital and proud of his semi independence, the only time he was seen to be unhappy was when he suffered bullying from some of the other residents and he had to be moved to another home.

He became a local character, walking the streets during the day wearing ex army fatigues and carrying his belongings in an old army rucksack, he could often be seen walking along practising karate stances and arriving at the Dojo long before training times to be in a friendly environment.

In tai chi he learned the entire 108 Yang Chen Fu form, admittedly in his own style, but he knew the moves and sequence, through sheer determination he learned the complex two man form and although only allowed to use wooden weapons, the double edged sword and broadsword forms.  In karate he graded very slowly but made a respectable 5th kyu grade.

As time went by, he was given his own flat and more independence, the students in both the karate and tai chi grew to respect his efforts and simple, happy approach to life.  He kept incredibly detailed notebooks of his training and philosophy but in the confused manner that reflected his struggle to remain sane.  He carefully studied and followed all religions from Sikhism to Christianity he said to ‘be on the safe side’ when he died.

I kept an eye on him, sometimes his diet could go a bit awry and he may have forgotten to take all his pills, at this times he became a bit excitable and confused.  We kept a supply of cereal bars nearby to help stabilise his blood sugar at these times.

He loved the breaks in tai chi where we would discuss philosophy with the students and always brought a bag of sweets to share with everyone for the occasion, everybody would allow him time to talk and sometimes he was extremely obscure and off subject and at other times his simple approach and wit would come to the fore humbling everyone and grounding them after their deep philosophical discussions.

Alan would spend hours in ‘Baggins’ a second hand bookstore in Rochester and buy every martial art book he came across, often bringing them in as presents to myself and the other students.

At one Christmas demonstration, he brought another ‘special needs’ Chinese friend from the home he was staying in who whilst watching the demo’s brought out a beer can and started to eat it!  One of the senior students relieved him of the can and some months later Alan asked me if I remembered the incident.  I replied that I did and Alan said he thought that his friend was a secret kung fu expert and was testing the Dojo!  Then he said “but in the end he returned to Vietnam……  or was it Dartford…”  This was typical of his mind.

I decided to sponsor him for a summer course in the Czech Republic and asked him if he had ever been abroad, “Oh yes” he replied, “to Portsmouth!”  On further investigation I discovered that unfortunately he couldn’t travel because of the intensive care required.

Alan earned the respect of everyone in the Dojo, he worked hard in both tai chi and karate, he was the first to arrive and the last to leave, always losing and finding his watch and various articles of clothing (including his trousers!).  One of the funniest sights was when he and another student had arrived wearing identical trainers and got them mixed up in the changing rooms, one pair were new and the other pair were old, the ensuing confusion was hilarious!

Towards the end of 2004 he was complaining of a pain in his leg and I told him to go to the doctor.  He didn’t and it turned out to be a thrombosis in the leg that travelled to his heart.  He died at home at Christmas and his funeral was on New Years Eve.  The crematorium was packed with students from the Dojo there to pay respects to their ‘special friend’.

At the Dojo Christmas party just before he became a ‘person in heaven’ I asked Alan to perform a demonstration of the Yang Chen Fu form and he said that he felt too embarrassed, so I offered to do the form with him, we finished to a huge round of applause and everyone congratulated him on his performance, I’ve never seen him happier. The photo here is of him in that demonstration.

Months later there was still an empty space in the Dojo.  No strange noises in the exercises, no flatulence (well…..  not so much), no sweets at tai chi break time, no one bumping into everyone and always going the wrong way, no smile and friendly greeting, no stories from a confused mind (well….  not so many) or simple grounding wit to remind us that life doesn’t need to be that complicated.  No lost watches and articles of clothing, no bag knocking everyone over every time he turns around and no presents of second hand books.

I’m writing this in memory of Alan Emery and to point out that martial arts truly are for everyone, special needs people may require a bit more tolerance at times, but they can make a valuable contribution to a dojo and are worthy of the effort.

And Alan Emery really was a special person and enriched the lives of everyone at our dojo; I am honoured to have known him.

7 thoughts on “In Memory Of Alan Emery”