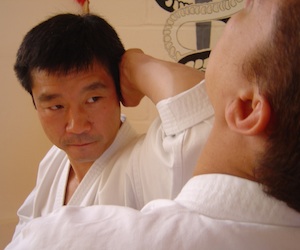 This interview was published in 2003

Whenever anyone spoke about Yoshinobu Ohta to me, they always spoke well of him. He was always quoted as being “all right’ or “a nice guy” and his Karate was always described as “good quality”.  He began Shotokan Karate at High School in 1974 and graduated from the famous Takushoku University that lists former students such as Nakayama and Enoeda. A talent such as his could only find it’s way to the JKA Honbu.

Luckily for Shotokan Karate in this country, Ohta Sensei came to England in 1982 to assist Enoeda Sensei and has remained here ever since developing the Art he loves.  The death of Enoeda left Ohta Sensei, in his own words, “staring into an abyss”; losing his mentor, not only in Karate, but in life itself.  Fulfilling his mentors’ wishes, Yoshinobu Ohta took up the JKA mandate and joined the English Karate Governing Body, thus carrying the desired unification process forward.  He now carries the flag for official JKA Shotokan Karate in England.

When we met I was struck by Ohta Sensei’s natural and honest manner.  He has an easy sense of humour and clearly loves his Art.  The photo shoot was a joy with his technical expertise, focussed attention and humility.

I would like to thank Chris Thompson for making this interview possible and accompanying Ohta Sensei to my Dojo.

SR  Welcome Sensei.  Can you give the readers some information on your background?

SR  Did you do any Martial Arts at school?

YO  Not at first. At the age of 15  I started Shotokan Karate at High School and have continued ever since.

SR  Who was your teacher?

YO It was my Japanese Language teacher, Shinobu Sensei 7th Dan, he was a 4th Dan at that time and used to run the after school Karate class.

SR  Did you learn any other Martial Arts?

YO  Yes.  It was compulsory within the school curriculum to learn either Judo or Kendo, so I chose Judo.  The classes were once a week for 2 years.

SR  Did you get your Dan grade there?

YO  Yes.  I received my Shodan at age 16yrs. I was lucky because at the high School I won the Area Championship and then went to the All Japan High School Championship and was invited to attend the Takushohu University because of my Karate connections, all the top JKA Sensei including Nakayama and Enoeda had graduated from there.

SR  Who was your Instructor at University?

YO Sensei Tsuyama, the training was so different that we all started again at white belt!  The focus really was on speed and power!

SR  Were there any other famous Sensei around at that time?

YO  Sensei Nakayama was the University Professor and would occasionally take the training.

SR Were there many foreign students around at that time?

SR  How did you get into the JKA?

YO  Whilst at University I used to attend classes there for extra training and after my exams I attended full time.  During the Instructors course there, my University Instructor, who knew Sensei Enoeda well, knew that Sensei Tomita was returning to Japan from England and asked if I would like to take his place.  I said that a couple of years would be okay, then they called me and said it could be 5 years.  I obtained permission from my parents, because they had a business and were expecting me to help administer it after University.

SR  What subject did you study at University?

SR  How did you find the differences between Karate training at school, High School and University?

YO  As I said earlier, the difference at High School was the focus in basics on speed and power. At University it was even more on speed and power but with far more focus on emotional control, it was almost spiritual in how we were taught to develop the skill in technique to manipulate the opponent.  We were put under a lot more pressure!  At University we lived together as a team, and therefore it was more military and mature in it’s outlook.  We had to watch how we looked after ourselves, our seniors and each other.

SR  So you feel that you really forged your character there?

YO  Yes, without a doubt!  I changed completely and became much stronger.

SR  When you came to England, had you done much international travel?

YO  Not a lot.  I had been to Libya with the University for a demonstration, but it did help me to decide to come to England, because I knew that I could adapt and I wanted to travel.

SR  How did you find England on arrival?

YO  Sensei Enoeda looked after me so well that I had no real problems.  I trained and taught at Marshall Street, my English was not so good then and I was young, but I found that I could communicate through Karate.  I found that if I was “natural” I could mix quite easily.

SR You are certainly the most natural Japanese Karate Sensei that I’ve ever met!

YO  Thank you.  There were so many people here that were more experienced in Karate than me that I didn’t need to stand on ceremony.  I stayed quiet for about 3 years to give everyone time to get used to me.

SR What was it like being so close to Enoeda Sensei?

YO  He never talked much about the politics, he came over from Japan to introduce Karate to England and left the politics to the English people.  We focussed on technical Karate and I’m not sure in hindsight if it was such a good thing.

SR  What was he like outside of the Dojo?

YO  He was the same age as my Mother and treated me as a student in the Dojo and like a son when we were outside.  I was allowed to see the private side of him domestically and he was a great man in the Martial Arts – I could never hope to aspire to his level – and a good family man at home and to me.  I could not say that he was a friend, but more like a Sensei and Father.  I looked up to him.

SR  You must have found his passing difficult….

YO  I still have not recovered yet….  I just keep going.  I knew he had cancer but didn’t realise how serious it was.  I expected him to return to England.  When the news came it was like standing on a cliff and staring into the abyss…..  With the politics that have happened since his passing, I realise how much he protected me.

SR  You’ve now formed JKA England and have a tremendous following, you’ve worked hard to help the unification of Karate in England by affiliating to the English Karate Governing Body, how do you see the future?

YO  I hold the JKA flag and just keeping going forward, those that want to  be JKA go with me and if others want to affiliate elsewhere, that’s their choice.

SR  Changing direction, have you ever trained in any other styles?

YO  Oh yes, when I was at High School and University and was competing with all the different styles, we often trained together, so I would train with Goju, Wado Ryu and Shito Ryu stylists often. It was important competing with them to know what their techniques were!  We had a lot of fun!

Always in Karate we had fun, by training and sweating together we made good friends.  Styles and competition didn’t count – we were spiritually bonded.  That’s what I would like to keep in England now.

SR  Other than the Judo you did at school, have you ever trained in any other Martial Arts?

YO  Not very much, but I did some Aikido to add to my self defence and body skills.

SR  Where are you teaching now?

YO  I teach in Fulham in West London 3 times a week and then travel around the group for the other 3 days.  I am very busy at the moment!

SR  You have affiliated JKA England to the English Karate Governing Body and I have to say that the Management Board are delighted to have you on board as part of the unification process.

YO  Sensei Enoeda always insisted that we should be part of the Governing Body and thought it to be very important to protect both instructor and student. We also considered it to be a priority to give the competitors access to be able to represent their country.  We also need to have Governing Body recognition for coaching exams and to hire Leisure facilities.  We are very grateful to the Management Board of the English Karate Governing Body for their help and assistance.

SR  Chris Thompson has helped you a lot here, how did you first meet?

YO  I live close to where he teaches in the Kingston area, so one day I visited his club and said hello and we became friends from thereon.  He has been very helpful.

SR  You are a new generation of Japanese Karate Sensei and it’s good to see you able to synergise with the English Karate Governing Body and help unify the direction of English Karate.

YO  I feel that my role is to be able to open doors to my students and give them a future within the EKGB, the EKU and the WKF.  This is an important role for JKA England.

SR Sensei, thank you for your time, and my thanks to Chris Thompson for arranging the interview.

YO  Thank you Steve.

One thought on “Yoshinobu Ohta 2003 Interview”